The eldest of three children, Nikki was born and raised in San Diego, California.  She started singing and dancing at the age of 5 and by the time she was 10, made her professional stage debut playing a Little Who in “Dr. Seuss’ How The Grinch Stole Christmas” at the Old Globe Theatre in San Diego.  It was then that she realized her passion for acting, singing, and dancing.

She went on to play several other roles in different musicals until she landed her biggest one, the title role in the Page-To-Stage workshop production of Tony-Award-Winners Duncan Sheik and Steven Sater’s new musical “The Nightingale” at the La Jolla Playhouse in La Jolla, California under the direction of Tony-Award-Nominated Moises Kaufman acting opposite Bobby Steggert, Corbin Reid, Kimiko Glenn, Charlayne Woodard, Eisa Davis, and Jonathan Hammond.  The role opened up new doors for Nikki, leading her to New York to sign with an NY agent and then auditioning for several Broadway Musicals reaching final callbacks for Lavender in “Matilda the Musical”.

After growing too tall for kid roles but not old enough for older roles in Broadway, she then shifted her focus on Hollywood, signing with a manager and an L.A. agent and then auditioning for TV/Film and Commercials.  It wasn’t long after that she started auditioning for Disney and Nickelodeon pilot and episodic shows left and right. In 2014, she booked her first feature film playing a cop’s daughter in “Driving While Black” under the direction of Paul Sapiano and acting opposite Dominic Purdy and Sheila Tejada. In late 2015, she booked her first TV show guest starring in season 2 of Disney’s “K.C. Undercover” playing the recurring role of Akina opposite Zendaya, Kamil McFadden, Kadeem Hardison, Tammy Townsend, Trinitee Stokes, and Veronica Dunne (episodes aired in May and June 2016). In 2016, she booked another guest starring role in season 3 of TNT’s “The Last Ship” playing Malaya opposite Eric Dane, Travis Van Winkle, and Bridget Regan (episode aired in August 2016) and then a large co-starring role in season 3 of CBS’ “Scorpion” playing Patty Logan opposite Ari Stidham and Jadyn Wong (episode aired in February 2017).  Earlier this year, she reached another milestone by booking her first voiceover pilot show and a brand new cartoon show on a leading animation network.  Just recently, she got promoted to recurring cast in season 4 of CBS’ “Scorpion” reprising her role as Patty Logan. 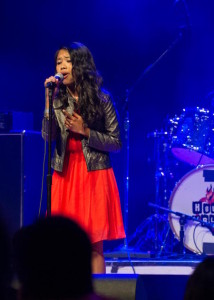 Nikki singing at the House of Blues San Diego

When not on a theatre stage or in front of a camera, Nikki enjoys performing and is actually an alumna of the Hollywood Launch Academy, a triple threat talent training program geared towards launching the next generation of triple threat performers in L.A., joining the ranks of Ross Lynch, Trinitee Stokes, Aaron Landon, Noah Urrea, Becky G, and many other up and coming young stars.  She has performed in various venues in Hollywood/LA and San Diego, and is a regular performer for the Tunes For Tots of Southern California to benefit various charitable organizations.  Her passion for giving back to the youth community has also led her to perform at various charity events/concerts such as Music4Education by Pencils For Promises, Heart of a Child by Resounding Joy, and Songs For Shelter by SD Youth Services and Toussaint Academy.

In her spare time, Nikki enjoys singing, dancing, doing musical theatre, spending time with her brother and sister, and watching her favorite TV shows Doctor Who, Supernatural, Sherlock, and Once Upon A Time to name a few.  But when needing an alone time, she finds solace in knitting, crocheting, doing origami, and pretty much anything arts & crafts.  Ask her why and she’ll tell you she’s a “Grandma at heart!”